The Central Student Council (CSC) is the official representation of all TUD students. Every month the CSC has a formal meeting with the Executive Board. The CSC consists of 10 students who put one full time year of their effort in defending student rights. Every year in May, elections take place to divide the 10 seats over the two parties. This year ORAS has 7 out of the 10 seats in the CSC.

In the end of May two weeks of campaign are followed by two days of elections. Any party can take part in the elections, but in the last years only two parties do: ORAS and Lijst Bèta. This intensive campaign is very important to show students what the Student Council does. Furthermore a high show-up percentage gives a better representation, which is useful in discussions with the Executive Board. The average show-up percentage is around 40%, which is quite high for Student Council elections compared domestically.

All parties have a list with 30 people on it. The maximum seats available in the Council is ten, so at least 20 people are not on the list to be elected themselves, but rather to show support towards the parties ideas and vision. Then, in September of the new academic year, the new elected members officially start their year in the CSC.

Participation has a certain structure and hierarchy, which is displayed in the following chart. All terms are in dutch.

Executive Board and Supervisory Board

The CSC gives advice to the EB about certain decisions. This could be about regulations, facilities or changes in education. In some cases the CSC has a veto right. For example the ‘’Student Charter’’ or the institutional plan. 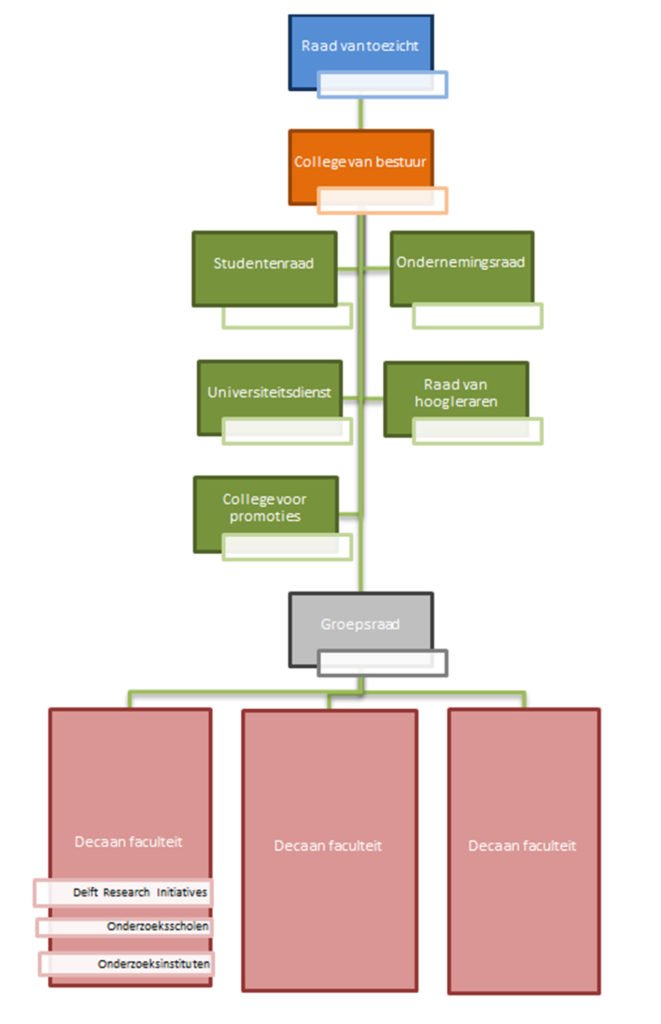 Next to the CSC there are Facultary Student Councils at every faculty. They have a monthly formal meeting with the dean of the faculty about the curriculum, the language of the study etc.

According to the ‘’Higher Education and Scientific Research Act’’ Central Student Council have certain rights and duties:

The CSC has a veto right about:

The CSC has the Right of Advice about:

The CSC has the right to plant ideas or plans. The EB has to take these seriously and give a formal reaction within 3 months. Otherwise the initiative is considered to be approved. These vary from a “student portal” to “RAS for international students”.

In the early 60's of the previous century, students had no say whatsoever in the decision-making at the then called Institute of Technology in Delft. All the rules and regulations were created by the teachers and staff and students should just do as they are told. The students were obviously in discontent and as the decade progressed, more and more demonstrations were held to appose the system.

The up-rise was concluded by the occupation of 'Het Maagdenhuis'. Over 700 students joined together in a strike, occupying 'het maagdenhuis' in Amsterdam.
The goal was to change the current system of higher education and introduce a more democratic system where students had a say in determining the form and content of their study. The police locked down the building for over five days, hoping that the students would give up due to starvation or thirst, but, as clever as they were, the students managed to smuggle in food and supplies by creating an air-bridge to the library.
At 9 AM on the 21st of May 1969 the police brutally ended the occupation. However, the message that the students wanted to send out was clear. One year later student participation on the higher education policy was recorded in national law.

After the Occupation of 'Het Maagdenhuis', an amendment was made to the national law on higher education. This resulted in the following board structure at the Institute of Technology in Delft:

Through the years, more and more parties within the council started to form. On september 15th in 1973 the party 'Centrum Groep' was founded to be a counterpart to the already existing 'Afdeling Actie Groepen'(AAG). Later, in 1975, the Centrum Groep  was renamed to Student Centrum Groep(SCG).

As the time progressed, it became clear that the system, introduced in 1970, was  inefficient and unwieldy. Additionally, amendments to the Act of Administrative Reform, gave the Executive Board more influence and power, creating a discontent in the University Council. This resulted in a lot of frustrations between council members and the Council and the Executive  Board.

In 1989 SCG started losing votes and eventually ended up with only 4 seats on the council. In that period, the most of the party's occupation consisted of organisational aspects. Promotion, organizing the political campaign and finding successors took most of the effort leaving only little time for the political tasks. Fortuntately, an Intertim Board, lead by Ludo Bergkamp, investigated what had to change. They introduces a board and a political association that could concern themselves with party affairs, allowing the council faction to focus on their political obligations. To emphasize these changes, the name of the party changed to the Organisation of RAtional Students (ORAS).

In the late nineties, the national government considered the ability of dutch universities to act as insufficient en ineffective. Therefore, the University Government Modernisation Act(MUB) was introduced.
This changed the administrative organisation drastically: the Executive Board became the governmental body of the organisation and the University Council was split up into the Works Council, representing both the academic and the support staff, and the Student Council. The role of the Council changed from governing to participation in decision-making. This structure is maintained up to this day.

The Technical University of Delft still works with a (part-time) Works Council, and a (full-time) Student Council

Around 2008, the situation for ORAS was very successful. However, the situation for the other party, AAG, went from bad to worse. With only 2 or 3 seats on the council, AAG faced the same issues as SGC had in 1989, and finally they decided not to participate in the elections in 2008. The party used next year to reorganize and prepare for the elections of 2009. The Student Union 'VSSD' therefore decided to set up the party 'Het Principe', based on the idea that there must be at least two parties in a democratic party system. That year, Het Principe got 2 seats.

In 2009, AAG rejoined the elections. Unfortunately, they once again ended up with 2 seats. The party decided to complete in the year, but not to run the next year. Therefore, the Student Council of 2010/2011 consisted solely of ORAS members. During that year, the council put a lot of effort in encouraging students to create a new party. By spreading a lot of controversial statements and strongly profiling the vision of ORAS, the council hoped to find students that would disagree with the posed statements and that a new party would emerge and they succeeded. As a result, the party Lijst Bèta was founded in the spring of 2011.

The Elections of 2011 and after

Want to know the members of the current faction? Click Here.

Within the student council the preparations for the meeting with the executive board (OV) can be seen as a cycle. In total there are 4 parts of the cycle all with a duration of 1 week.

If applicable, there can be a committee within the university council (Working Council + Central Student Council) and/or the CSC to further discuss the points of the agenda in depth. The person with the right portfolio, corresponding to the topics, will take part in these discussions.

The internal meeting is a formal meeting between the parties in the CSC. The technical meeting counselor and the formal secretary of the CSC are also present at these discussions. At the IV the points on the agenda for the OV will be further discussed and finalised. The strategy and vision for each points will be finalised by the first and second speaker of said point.